With recent research identifying the increased risk of cancer amongst firefighters, should all responders consider the potential risk of contamination whilst attending fires?

A landmark study conducted in 2018 by The University of Central Lancashire (UCLAN) revealed that skin absorption, rather than inhalation is the leading cause of exposure to carcinogenic gases created during a fire and the stark reality is that fire fighters have an increased risk of cancer as a result of exposure to products of carbon combustion such as polycyclic aromatic hydrocarbons (PAHs).

The report has naturally led to renewed focus on immediate and thorough decontamination of personal protective clothing, equipment and even workspaces such as vehicle cabs and stations which have also found to become contaminated by PAHs; a further finding of the study. With this in mind, should the focus be on fire fighters alone, or should all emergency responders (and non-emergency responders) be aware of the risks of contamination whilst attending operational incidents or the aftermath of fires?

The UCLAN study would suggest that with PAHs being transferred to surfaces on equipment, in vehicles and in buildings, any agency who attend fires must be cognisant of the risk of contamination. This includes anyone who has to enter the affected area to deal with casualties, dampen down or cut away, conduct post fire forensic investigation or to identify structural integrity (where a building is involved); essentially, all stakeholders from local authority agencies, specialists and private contractors. It therefore follows that the ability to safely, quickly and easily remove contaminants on scene is imperative and the challenge is how to make this process immediately available in a practical way.

De-Wipe is scientifically formulated to remove and help remove the risk of carcinogens and bacteria thanks to it’s key ingredient proactive compounds that defend against hydrocarbons such as soot and dirt with ease. The after-fire wipe will help reduce the risk and dirt from the wrist and hands, face, ears, jaw and areas around the neck and throat. Additionally, they can also be used to wipe down any other contaminated areas after an event. 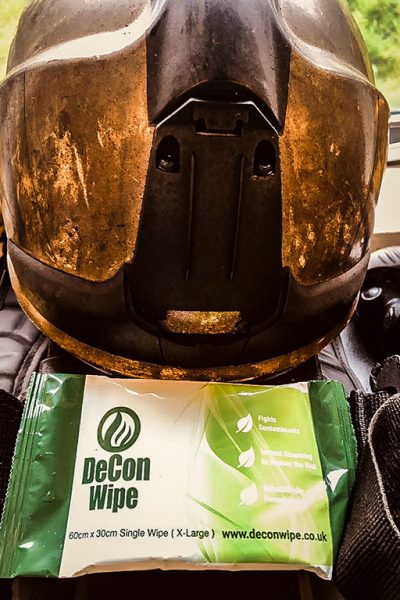 De-Wipe are designed, developed and delivered in the UK and come in a variety of sizes. They are available as individual wipes or multi packs. De-Wipes are biodegradable so you can be clean and green.

De-Wipe have conducted a landmark study with leading professors at Manchester Metropolitan University to test De-Wipe’s effectiveness at removing carcinogenic pollutants from skin – the results show De-Wipe was able to remove the most harmful dioxins and PAHs from skin.  READ THE STUDY >

For an essential guide on how to safely and effectively decontaminate using a De-Wipe, head to our HOW TO USE page.