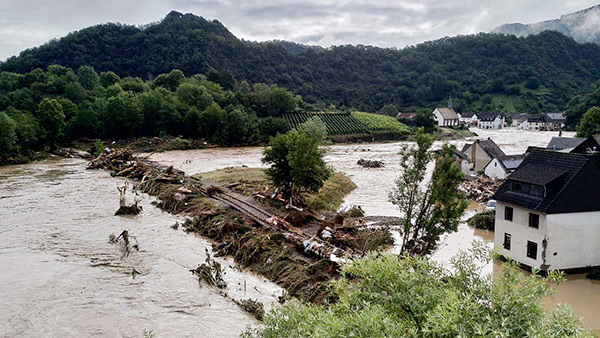 De-Wipe has donated over 43,000 of their Alcohol Free Sanitiser Wipes to Bullard Europe, their official distribution partners in Germany, to support the hygiene and wellbeing of firefighters, flood rescue personnel and emergency rescue technicians in the severely flood-hit Ahrweiler region of western Germany.

It is extremely important that these Sanitiser Wipes are distributed into this region hardest hit by the recent floods as soon as possible. This is because the rescue operation in Ahrweiler is currently moving onto arguably its most hazardous stage by concentrating its efforts on debris and waste removal. The risks posed by waterborne pathogens within floodwaters and toxic mud and waste left behind by the floodwater represents the biggest risk to the hygiene and wellbeing of those dealing with the flood’s aftermath.

Floodwaters are contaminated with sewage and other pollutants within oil and silt, so it is vital rescue workers in the region are kept as clean as possible. Using De-Wipe’s Alcohol Free Sanitiser Wipes to clean skin and equipment after exposure to toxic floodwater waste will limit the spread of infectious waterborne diseases, thus reducing the risk of an epidemic breaking out in the area.

Bullard Europe state they intend to pass the Sanitiser Wipes onto the FD Association of the Region in Ahrweiler, who will then distribute the wipes amongst rescue personnel and to inhabitants still living in the region.

The following is taken from Bullard GmbH’s press release:

Avoid contact with water of the Ahr as much as possible

Experts advise that the water of the river Ahr is heavily contaminated with pollutants since the recent flood disaster. Bullard GmbH from Remagen is now providing the Ahrweiler District Fire Brigade Association e.V. with two pallets of 43,000 special disinfectant wipes. The wipes are intended to help improve operational hygiene during clean-up work, thus preventing the spread of waterborne diseases and the outbreak of an epidemic.

The flood of the century occurred on the night of 15 July, destroying heating oil tanks in the cellars of residential buildings in addition to petrol stations and company production facilities in the Ahrweiler region. However, it isn’t just diesel and other fuels, as well as chemicals, polluting the water of the Ahr, but also garbage waste and animal carcasses. Since sewage treatment plants have been destroyed, wastewater must currently be disposed of untreated. The water of the Ahr should therefore never be used for washing or cleaning equipment.

To prevent stomach and intestinal diseases, infections with coliform bacteria as well as cholera and hepatitis A, skin contact with contaminated water and mud should be avoided at all costs, and gloves should be worn during clean-up work. “The emergency services on site are working under very dangerous circumstances these days. The removal of debris, sludge and garbage is associated with considerable risks for health,” says Hans Alfter, Managing Director of Bullard Deutschland GmbH.

Bullard GmbH, which specialises in the production of fire brigade protective equipment, together with its UK partner company De-Wipe are now supporting the Ahrweiler District Fire Brigade Association e.V. with two pallets of disinfectant wipes. “The topic of operational hygiene has traditionally been of great importance to us; we have already launched the ‘Better After Fire’ wipe, a product specifically for firefighters proven to remove carcinogenic substances released in fire smoke from the skin,” says Alfter. In contrast, the disinfectant wipes that Bullard and De-Wipe are now making available to the Ahrweiler District Fire Brigade Association for passing on to clean-up workers and residents of the region have been specially developed for the effective control of waterborne pathogens. The wipes have been proven to eliminate 99.99% of all known pathogens in seconds. In contrast to comparable products, these wipes are completely alcohol free, therefore supporting the natural protective layer of the skin; this means that they’re suitable for cleaning sensitive areas of the hands and face as well as disinfecting surfaces.

Scientifically proven to reduce the risk of infection from bloodborne and waterborne pathogens. 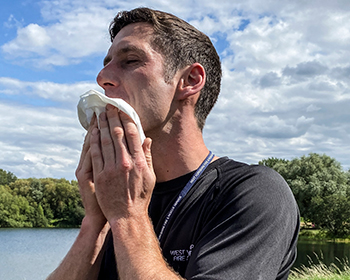