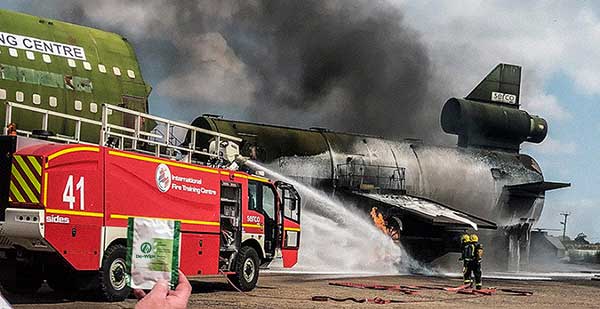 Firefighters across the UK are demanding the Government takes swift action to provide a stronger protection from cancer.  These fresh calls for protection are the result of research conducted by a BBC investigation which found firefighter cancer rates are twice as high as the general population.

Earlier Research conducted by Anna Stec at the University of Central Lancashire identifies skin absorption as a principal source of exposure to cancerous toxins produced during fire and thus is a primary cause of the increased level of cancer within UK Fire and Rescue Services.  Professor Stec is a prominent voice amongst the latest round of news too.  She states that the rate of absorption automatically increases in hot environments meaning firefighters become “a sponge for all the fire toxins.”

The fact remains that a lack of UK firefighting regulation without a standardised directive existing to govern proper decontamination processes is causing an alarmingly high exposure to cancerous toxins.  What exists instead is firefighter decontamination being left to individual brigades to decide how best to tackle.

The issues are further cemented in the testimony of crew manager Stuart Elliott from Teesside International Airport.  He states that there isn’t always time to carry out a proper decontamination process:  “All of the carbon off the fuel, the rub off the tyres gets impregnated into our kit so we’ve got to give ourselves a wipe over until we get back to the station.”

Stuart’s comments are particularly relevant as filming for the BBC’s Inside Out program – in which details of the full BBC investigation was revealed – took place at the International Fire Training Centre at Teesside International Airport in County Durham where he is stationed.  De-Wipe supplies their after fire decontamination wipes.  Below is a screenshot from the episode; it’s great to see De-Wipe – the only UK biodegradable scientifically proven wipe – being used to decontaminate face, hands, neck and PPE on scene by firefighters eager to tackle this issue of decontamination. With their local crew manager stating the desperate need for decontamination wipes on scene coupled with comments from Fire Brigades Union spokesperson Chris Moore – an active firefighter from South Shields receiving treatment for Non-Hodgkin’s Lymphoma – the timing of this partnership is proving crucial.  Mr Moore states: “Up and down the country firefighters are dying [of cancer], due to them saving lives in the line of duty, and their job is killing them.  The government needs to wake up and realise, ‘OK there could well be a link here’… Give us better protective equipment.”

The program also states: “there are 16 major compounds within carcinogens where the toxic concentration may lead to cancer.”  De-Wipe has been scientifically tested on 17 of the most carcinogenic chlorinated dioxins and 8 of the most cancer-inducing polycyclic aromatic hydrocarbons (PAHs) produced during fire – the results were overwhelmingly positive with results showing De-Wipe was able to remove the most harmful dioxins and polycyclic aromatic hydrocarbons (PAHs) from skin.  READ THE STUDY RESULTS >

The full BBC investigation aired on 30 September 2019 on the BBC’s Inside Out program on BBC One at 7:30pm.