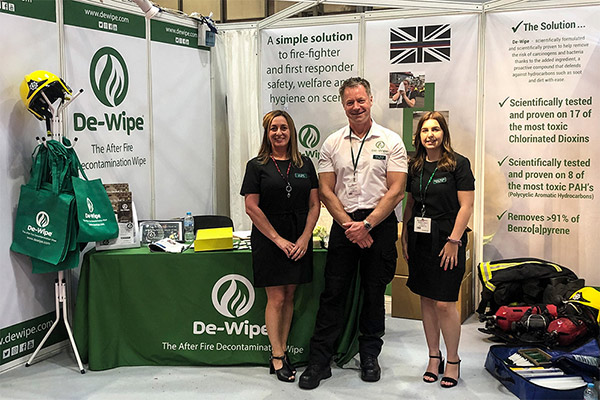 The team at De-Wipe had an amazing time exhibiting our after-fire decontamination wipes at this year’s Emergency Services Show 2019.  The event took place at the NEC in Birmingham on the 18th and 19th of September and was visited by over 8,000 emergency services personnel – fire and rescue services, police and ambulance first responders, plus a wealth of search and rescue volunteers were in attendance and keen to see our innovative product first-hand.

With the long-term effects of exposure to carcinogenic toxins produced during fire being somewhat of a hot topic currently within the UK Fire and Rescue Industry, firefighters, fire chiefs and station managers were especially keen to get a hands-on demonstration of our decontamination wipe so they could understand the ease at which De-Wipe can be incorporated into proper decontamination processes and thus reduce the risk.

The exhibition also gave us opportunity to discuss in more detail the positive results of our scientific study conducted with scientists at Manchester Metropolitan University.  Lead professor on the study, Dr David Megson, even made an appearance on the stand on the Wednesday.