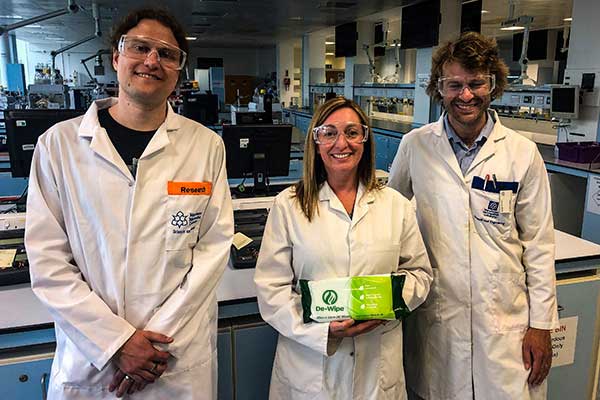 De-Wipe are proud to announce the positive results of a scientific study conducted by leading professors at Manchester Metropolitan University.  The results are overwhelmingly positive indicating us as the only UK manufactured biodegradable after fire decontamination wipe to remove from skin the most harmful cancer-inducing dioxins and polycyclic aromatic hydrocarbons produced during fire.

Cancer is now the leading cause of death amongst firefighters with data compiled by NIOSH indicating this figure to be as high as 70% in the US in 2016.  US firefighters succumb to cancer-related illnesses at twice the rate of the general population.

Information contained in the UK government’s ‘Toxic Chemicals in Everyday Life’ publication suggests long-term exposure to toxin contaminated environments leads to UK firefighters developing more than one type of cancer.  These cancers are also being diagnosed at an increasingly younger age.

The publication confirms: “This exposure has been linked to elevated rates of four cancers in firefighters: multiple myeloma, non-Hodgkin’s Lymphoma, prostate, and testicular.”

Recent research conducted by senior toxicology professors indicates that harmful toxins are entering the body not just through inhalation – toxin-rich compounds present in carcinogenic soot and dust absorb at an alarming rate through skin.

Worryingly, the toxins present in fire are becoming increasingly dangerous due to the proliferation of non-combustible building materials and flame-retardant synthetic polymers present in furniture.  “Studies of California firefighters show that they have higher levels of [the synthetic flame-retardant] PBDE’s in blood serum than the general population,” continues the report.  “In addition, elevated contamination was identified in fire station dust compared with Californian homes.  This is possibly linked to tracking of contamination from incidents to fire stations.”

Chlorinated dioxins are some of the most toxic, cancer-inducing compounds fire produces.  As a result, Associate Director of the Ecology & Environment Research Centre at Manchester Metropolitan University Dr David Megson is especially keen to examine De-Wipe’s capability at removing 17 of the most dangerous chlorinated dioxins from skin during controlled laboratory tests.  The results are extremely encouraging indicating De-Wipe is able to remove chlorinated dioxins.

The ground-breaking study also focuses on the 8 most hazardous polycyclic aromatic hydrocarbons (PAHs) – including the highly carcinogenic Benzo(a)pyrene.  Results indicate De-Wipe is able to remove these toxic PAHs including an amount greater than 91% of Benzo(a)pyrene after exposure to skin in the controlled laboratory tests.

Check out the below video for a thorough explanation conducted by leading professors at the University.

De-Wipe is committing to a further 4 years of crucial study with the scientists at Manchester Metropolitan University.  The area of investigation is highly complex; the team of researchers at Manchester Metropolitan University are keen to perform further research in collaboration with De-Wipe and UK Fire and Rescue Services to continue investigating this important issue.

Learn how to effectively and safely decontaminate using a De-Wipe after fire decontamination wipe with our essential step by step guide.  HOW TO USE >